The first EpiHack was held in Phnom Penh, Cambodia in partnership with Change Fusion, InSTEDD, Opendream, and the Royal University of Phnom Penh on August 6-8th, 2013. This event emphasized on 5 existing projects.

CoPanFlu The Cohort for Pandemic Influenza in Laos (CoPanFlu Laos) is a laboratory-based system first implemented in Vientiane, Laos, in 2009 to investigate 2009 A(H1N1) influenza seroconversion rates and their determinants within an unvaccinated population. ( Bruce Lowry, 2013 ) The project team worked on potential options for automating both data collection and specimen collection processes. ( Jennifer Olsen, 2013 )

DoctorMe The first mobile application for health in Thailand on the IOS and Android systems developed by Opendream. Initially, DoctorMe was created in 2011 to promote good health care and first aid for all people in Thailand. ( Bruce Lowry, 2013 ) The team was working on develop a participatory module where users could self-report symptoms they were experiencing. ( Jennifer Olsen, 2013 )

ILI Surveillance – BOE The Bureau of Epidemiology in Thailand set up web-based reporting for Influenza-like Illness (ILI) with the hospitals submitting the number of ILIs weekly. A system analyst then sends back the results of national statistics coming into the ILI system to the hospital and other responsible people in the area via the Internet, email, and SMS for up-to-date information on the flu situation week by week. ( Bruce Lowry, 2013 ) A prototype of this group showed hospitalized ILI cases by color code based on a number of cases. ( Jennifer Olsen, 2013 )

Maetao Clinic The Maetao Clinic is a health provider and training center based in Mae Sot, near the Myanmar-Thailand border. Maetao was established to contribute to and promote accessible, quality health care among displaced Burmese and other ethnic peoples in this border location. ( Bruce Lowry, 2013 ) The team working to support the Mae Tao Clinic transitioned electronic medical record (EMR) data to a cloud-based infrastructure and created a data visualization dashboard to allow for map-based visualization of diagnoses. ( Jennifer Olsen, 2013 ) 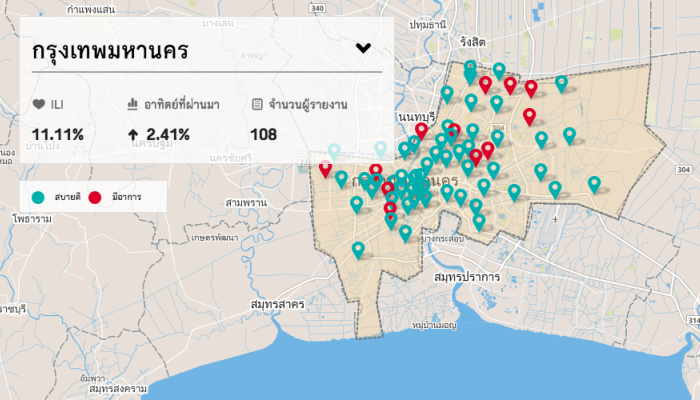